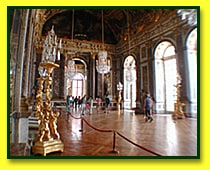 To the lone tourist, wandering without a guide or foreknowledge of its history, the Palace of Versailles, creation of the mighty Sun King Louis XIV, is a magnificent spectacle.

Its Hall of Mirrors (right), King and Queen’s bedchambers, furnishings from the 17th Century, enormous ornamental gardens and spectacular fountains make it one of the world’s truly awesome buildings.

If, like me, you have steeped yourself in the history of the Sun King’s reign at Versailles through the compelling story of Louis XIV’s passion for Angélique de Sance de Morens, written with an incredible eye for detail and historical accuracy by Anne Golon, it brings a wealth of memories to life.

And a knowledgeable guide can round out the picture even more and give flesh to the ghosts of the past.

Imagine, therefore, a tour of areas of the Palace of Versailles unseen by the average tourist – guided by arguably the world’s leading expert on the intimate details of the time of the Sun King and the personalities of his court.

That was my privilege as I became the first person since the Angélique group started on the Internet to be given a guided tour of part of the world-famous palace by Anne Golon – a tour not only of the Sun King’s abode but the site of the beginnings of the greatest and best-selling series of historical fiction ever written.

More than 46 years after the beginnings of the Angélique story, Anne took myself and her daughter Nadja to the library, where she and her husband, Serge, spent more than two years researching over 700 sources to create the amazing world of Angélique.

Anne noted that the library is the same now as it was nearly half a century ago, with one exception – the addition of a lift. But rather than take the lift we climbed the long stairs so that she could show me the same pictures on the wall that had inspired her and helped her with her marvelously intricate descriptions – pictures of the early buildings at Versailles, the feasts, the hunting, and the court at work and play.

In the library we saw row upon row of index cards, arranged by author and by subject, pointing to the thousands of texts – some so ancient and precious that few are allowed to touch them.

There we watched as students of history pored over the words of scholars and correspondents long dead, and there we were summarily rebuked by the stern room president for talking – the same one who had presided here over four decades ago when a young Anne Golon haunted the aisles.

As we moved out of the library to the lesser-visited grounds of the palace, Anne explained that the orange trees that festooned the grounds were kept in the orangery (below) during the cold winter months and brought out for the summer, just as in the time of Louis XIV. Although I had visited the orangery in the Tulleries to see the wonderful wall-long paintings of Monet, I had never before known what the word meant. 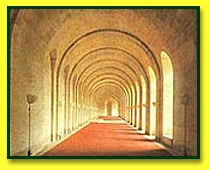 Anne displayed an encyclopaedic knowledge of the palace and its history, garnered from over 40 years of meticulous research. When I mentioned that it must have taken “thousands” of gardeners to maintain the grounds, she casually noted that there were 52 head gardeners.

Previously she had told me how some of the buildings outside the palace had been the enormous kitchens needed to supply food for the magnificent banquets Louis was fond of providing for his court.

Apparently the distance from the kitchens was such that, in spite of candles positioned under the huge platters, the food always arrived cold. The austere Louis XIV ignored such trifles but his successor, Louis XV, quickly tired of this and ordered kitchens to be added in the main palace.

And so we moved to the bottom of a great, three-tiered external staircase, known as The Stair of a Hundred Steps. I didn’t count them, but by the time we were half-way up my legs were feeling the climb, while the 79-year-old author climbed on unruffled, regaling me with further stories.

These, she told me, were the steps down which the king walked to do his service to the poor and wretched people of Paris, who came to be cured of the scrofula by the ‘King’s gift’, or laying on of hands.

Remembering this scene from Angélique and the King made me realise I was being given a tour by the woman who created a story that has sold over 200 million books in more than 46 countries, and whose books have been published by more than 320 editors around the world.

The thought that, of those millions of Angélique fans, I was the first to be shown and told these things by the author was at once humbling and inspiring.

Anne’s depth of involvement in her tale and quest for realism was confirmed when Nadja showed me the part of the gardens where her mother always ‘runs to catch the sunset’ because she wants to describe it for her readers and “no two sunsets are the same”. 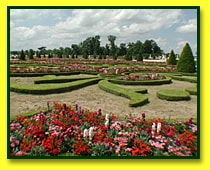 Her enthusiasm for her characters is palpable, and she knows every facet of their personalities. Many bad things have been written about Madam Maintenon (formerly Francoise Scarron), but, she told me, Angélique knows the true person behind the stories…

Both Anne Golon and her creation, Angélique, have come full circle. More than 40 years after the character’s genesis, she is back in the library of the Palace of Versailles, digging deeper into the later lives of Madam de Maintenon, La Grande Mademoiselle, Athenais de Montespan, Monsieur (no longer le Petit Monsieur now that his uncle has died), Desgrez the polieceman and, of course, the Sun King, Louis XIV.

In, appropriately, the 14th Angélique book, Angélique and the Kingdom of France, she too comes full circle and returns to face old friends and foes in the hunting grounds of Versailles.

The research is complete, the plot is set, and the first chapter is laid down. For those millions of non-English-speaking readers who left Angélique at the end of The Victory of Angélique, the tale approaches its ultimate and inevitable sequel.

And for those millions of English-speaking readers, another book will be added to the four they have yet to enjoy (Angélique in Quebec, books one and two; Angélique: The Path of Hope, and The Victory of Angélique). For them, a treat awaits as the long-awaited translations begin.

Anne Golon’s legions of devoted fans will be delighted to hear she is fit and well (well enough to walk over 2 kilometres and up a lot of steep stairs while talking all the way, without breaking stride), as bright and brimming with enthusiasm as ever, and determined to continue her unique and glorious epic for her readers.

I can hardly wait.

Steve Hall is the international sales and marketing manager of an Australian software developer who is originally from England but now lives in Sydney. He is the vice-president of Friends of Angélique and is acting as literary agent for Anne in regard to English language publication of the Angélique books.