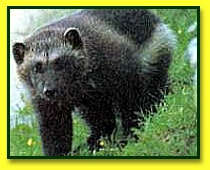 Anne Golon and her husband Serge are legendary for their painstaking research into various topics in the Angélique stories, but on one particular subject the great French authoress virtually turned herself into the world authority.

This time it was not an historical source that Anne Golon went to great lengths to research, but an animal.

The wolverine is, by nature, mysterious and secretive, and is probably one of the least known and least understood carniverous mammals in the northern hemisphere.

Relatively few people will have even heard of the wolverine unless they have read Angélique, fewer still will ever get to see one in the wild, and many of those who do catch sight of one will mistake it for the runt of a bear litter.

Impressions of the wolverine are often coloured by a fearsome reputation that it doesn’t really deserve. When Ernest Thompson Seton wrote a description of the animal back in 1906, for instance, it was probably based more on hearsay than anything else as the wolverine has been the victim of myth and superstition for centuries.

He wrote: “Picture a weasel – and most of us can do that, for we have met that little demon of destruction, that small atom of insensate courage, that symbol of slaughter, sleeplessness, and tireless, incredible activity – picture that scrap of demoniac fury, multiply that mite some fifty times, and you have the likeness of a wolverine.”

Another name for the wolverine is the glutton, and this, too, is rather unjustified because it is based on the misconception that the wolverine will kill and eat its prey even when it is not hungry. In the middle ages, people even believed that anyone who slept on a wolverine skin would always be hungry. In fact, their gluttonous reputation probably comes from their resourceful habit of tearing their food into chunks and burying it to eat later.

Their perceived aggressiveness is also out of step with their habits because many wolverines have now adapted to eating the carcasses of animals that have died naturally rather than killing to eat, so that they are now often called ‘hyenas of the north’.

However, from merely earning a bad reputation, it is a short step for the poor wolverine to become embodied with all manner of devilish characteristics and mystical powers.

With such a fearsome image, it was hardly surprising that the wolverine was persecuted to the extent that its numbers were severely reduced in northern Europe, but the tide has turned in countries like Sweden, Finland and Norway who now protect the wolverine by law and invest in conservation and research projects.

The wolverine is an important element in Anne Golon’s stories set in the New World because of its association with Cantor, Angélique’s younger son by Joffrey de Peyrac.

Throughout the series Cantor is given the benefit of being clairvoyant and this, to a degree, explains Cantors’ embracing the New World with a complete disregard for convention.

Despite his education, Cantor is really a ‘child of the woods’ – not unlike his mother before him was a child of the marshes. He is in tune with nature and has an extremely stubborn (even to the point of being arrogant) manner about him.

The wolverine is considered an extremely dangerous wild animal and just to make people doubly afraid of it, is thought to have supernatural powers. So, on discovering an abandoned cub, Cantor decides to rear it for two reasons – firstly because he recognises it as an animal requiring help, but, more importantly, because he knows full well that he can create all manner of mischief by making this oddity of nature his companion.

It provides a continuous link with Cantor and his mystic side. Wherever Cantor is, so is the wolverine – even if not in immediate evidence. Cantor’s wolverine has to have its ‘wild time’ and will go off on its own as necessary, but when Cantor is in need of it they seem to have a telepathic link.

The most prominent appearance of the wolverine and the most potent is in Angélique and the Demon when the villagers brutally turn on Angélique, and the wolverine is used to disperse them. Its appearance and siding with our heroine and her son fuels further speculation about Angélique being in league with the Devil.

All good and clever stuff – and more so because it receives the traditional Anne Golon trademark of meticulous attention to detail as she brings the wolverine to life on the page.

It’s no wonder that, at the time of the writing of the latter books, she was arguably the world’s leading authority on the wolverine and her documentation was used by naturalists to study the animal further.

Graham Carter is a freelance editor, writer and designer from England.

J Anna Ludlow is the treasurer of Friends of Angélique. She lives in England and has worked in the British television and theatre industries, but is now duties manager for Nottingham Police. She has enjoyed reading the Angélique books since the early 1960s.