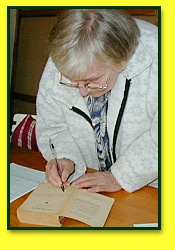 In an exclusive interview conducted at Versailles in the autumn of 1999, Anne Golon spoke freely about various aspects of her life. It was conducted with the invaluable help of Anne’s daughter, Nadine Goloubinoff, who acted as interpreter, and is transcribed here in full. Questions are in bold type; Anne’s answers in plain type.

Part 4: The importance of religion in the Angélique stories

In the books, you talk a lot about the Catholic Church, and Angélique seems to be a believer, but outside of the dogma. She has a feeling for the religions of the east as well.
That’s why she is modern and she has a lot of friends, because she has the feeling of the new century. It’s better to have this religious feeling because people have been paralysed in all religions and all faiths. That’s why I wanted to add this story of the conflict between the Jesuits and Angélique, which symbolises the conflict against the woman which is the sin – the evil.
I smile sometimes because I see all these people who didn’t notice that this work is explosive.

It seems that Angélique is almost a forerunner of the New Age religions, the new way of looking at religion as against the old way.
Yes. I am astonished that more readers do not see this.

You were ahead of your time. Today, in the movies and the writings, people are now talking about witches and the new religions in a more open-minded way, and it seems that Angélique did that 30 years ago.
Maybe it’s for that reason that it hasn’t been taken more seriously, because it disturbs some people. Yet she was religious. She didn’t ask herself questions. For example, when she arrived in Quebec, she thought she must have a priest for confession, or she will be rejected. She was happy to find herself in church again to sing songs like when she was a child, and she considered herself a part of it. The church tells her to believe that, that way, but the woman did not believe in it.
We don’t escape from our times. In the 17th century one couldn’t let oneself say ‘I don’t believe’, or they would be burned. And in many ways it’s the same today.

There are many more groups today.
Yes. I am out of the group because I am a real believer and I saw something and I feel some things that are not with the French at all. I go to church, but now if we speak about God and prayer, people look at us as if we are crazy.
There’s also a scene in ‘Angélique in the New World’ (also known as ‘The Countess Angélique’) where she finds some mint before she meets Outaake, the Indian, and she is almost seeing God in the forests and in nature, which is very primitive and yet very open. When she is in the New World where the earth is new too, her strengths are more primitive. She is like a child and this is the way that things are taken.