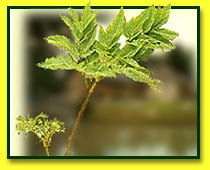 Anne Golon never actually tells us why she chose to call her heroine Angélique, but a little knowledge of one of the herbs that grow in her homeland of Poitou surely throws up some parallels which are not coincidental.

Angelica is not unusual among herbs in being thought capable of all manner of remedies and uses from medicinal to culinary, but it seems to have more qualities than most – just like Angélique herself.

In fact, angelica archangelica has been renowned for centuries as a panacea for just about every ill under the sun.

Like Angélique, it thrives across northern Europe and is particularly at home in damp meadows, on river banks and around marshes, such as those found at Poitou.

The herb is believed to be named after the feast day of the Archangel Micheal, because this was the time of year – in the old calendar at least – when angelica usually came into bloom. Micheal, the ‘Great Defender’ is supposed to have appeared in a vision to explain the herb’s protective powers – surely another allegory with a heroine who is often cast as a leader and protector herself.

Angelica is one of the garden’s most impressive plants, growing up to ten feet tall and three feet across, with lush, large green leaves. When made into a tea, the leaves are a tonic for colds, a relief for bronchial catarrh and an aid to digestion. It is also reputed to have a modern use, helping to prevent travel sickness in cars by freshening the air.

Indeed, angelica’s greatest strength is probably aromatic, with all parts of the plant traditionally used to prepare perfumes and pot pourri. These days, oil of angelica is an important ingredient in commercially produced shampoos, perfumes and soaps.

Generations of families have also used angelica in the kitchen, and Angélique and her friends were very much aware of its wide use and value, as described in the very first chapter of the very first book:

“In the marshes, Angélique had a friend in Valentine the miller’s son. And in the forest there was Nicholas, who was one of the seven children of a labourer, and was already working as a shepherd for Monsieur de Sancé.

“With Valentine she would go boating on the waterways bordered with forget-me-nots, mint and angelica. Valentine would pick whole branches of this tall, thick, exquisite-smelling plant. He would then go and sell it to the monks of the Abbey of Nieul, who used its roots and flowers for a medicinal liqueur, and its stalks for sweetmeats. In exchange, he obtained scapulars and rosaries which he would hurl at the heads of the Protestant village children, who would flee screaming, as if the devil himself had spat into their faces. His father, the miller, deplored this strange behaviour. Although a Catholic, he prided himself on his tolerance. And what business had his son, anyway, to peddle bunches of angelica when some day he’d inherit the miller’s charge and could set himself up in the comfortable mill, built on piles at the water’s edge?”

Only a few pages later, angelica crops up again when Angélique and her father visit Molines. The symbolism within Anne Golon’s writing will not be lost on the reader as the steward’s wife introduces Angélique to another popular use for angelica:

“Angélique…slipped out of the office and returned to the big hall, where Madame Molines was busy rolling the dough for a huge tart. She smiled at the little girl and offered her a box, from which emanated a delicious smell.

“‘Here, taste this, my pretty one. It’s candied angelica. You bear its name. I make it myself with fine white sugar. It’s better than that of the abbey fathers who only use brown sugar. How do you expect the Paris pastrycooks to appreciate this condiment after it’s lost its flavour from being boiled in huge vats that haven’t been scoured properly after being used for soups and black pudding?’

“Angélique bit with delight into the slender, sticky green stalks. So that’s what became of those big, stong marsh plants after you picked them! In their natural state they had a more bitter tang.”

It is wholly appropriate, then, that the Friends of Angélique, the official ‘fan club’, which was set up in 1999 by readers of the books, should choose the angelica plant for their official motif.

Graham Carter is a freelance editor, writer and designer from England.